Recovering from a bad flash on a JTAG

Save your Christmas lights and be careful next time :p

Posted by iBotPeaches on Nov 25 2010 08:32 PM
If you ever make a bad flash, do not worry. These bad flashes can be anything below:
What you need to do is boot into Xell (by holding down the eject button to start). Xell allows you to recover NAND backups and gather your CPU key. Assuming you have a newer build of Xell, or already have a NAND backup you can create a new updflash.bin, (like you were going to use Flash360.xex to flash).

However, clear a flashdrive and format using FAT32. Then place ONLY your updflash.bin in there. 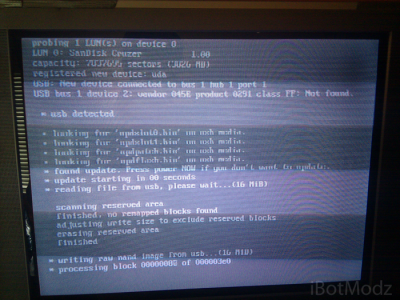 (Shows the flashdrive being detected and flashed)