5 replies to this topic

May 16, 2009 - On July 28, Microsoft is set to release a retail collection of Gears 2 downloadable add-ons called All Fronts, a treasure trove of 19 multiplayer maps and a single-player campaign mission. This week, Microsoft and Epic Games held a fan event at downtown Seattle's Experience Music Project to show off a tiny slice of the new compilation, and IGN was on hand to give it a go.

But first, a complete run-down of the new content that will be included in All Fronts retail box. In addition to all the maps included in the Flashback, Snowblind,and Combustible, multiplayer map packs, All Fronts will also feature seven brand-new (or in some cases re-made) maps in a mini-collection called Dark Corners. As the name implies, these maps are set all over Sera in all different types of environments. If you want a detailed description of each, check out our All fronts Dark Corners article.

But wait, there's more. In addition to the seven new multiplayer maps, there's also a single-player mission included in Dark Corners called Road to Ruin. Remember that moment in the Gears of War 2 campaign when Marcus asks a thoroughly pissed-off Dom how he'd like to proceed into the Locust hollow? Originally, the developers intended for there to be a real option for players: Go in guns blazing or sneak in stealithy, dressed as Theron Guards. 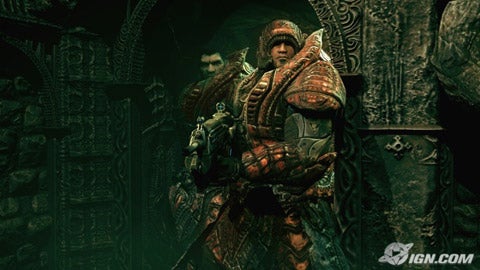 Stealth in Gears of War 2? Anything's possible if you just believe.
"The nature of game development is you can never get in everything you want to get in as a storyteller," said lead writer Josh Ortega, who appeared at the event alongside Epic Games President Michael Capps and Microsoft's Xbox Live guru Larry "Major Nelson" Hyrb. "With the Road to Ruin scene, it just wasn't ready."

Rather than push the scene out the door at launch, Ortega and Capps said Epic cut it out altogether and is releasing it in July as part of Dark Corners/All Fronts instead.

But the main draw for Dark Corners, which will also be released a separate download, is the new set of multiplayer maps. And Microsoft had one of those areas, a map called Nowhere, playable at the event. Nowhere takes you out of the intensely urban setting of most Gears multiplayer maps and out into the sun-drenched desert, where a collection of dilapidated buildings and vehicles mark the long-dead location of a once popular traveler's outpost.

In and around the shells of an old diner, gas station, mechanic and motel, you'll find countless ways to maneuver for advantage. The center of the map is largely open, save for Gears' signature burned-out cars. But around the edges are old storefronts that you can enter, usually from more than one side. The setup made for some pretty interesting fights, as you never really know who's coming up behind you. In the middle of Nowhere (see what I did there?) is a raised platform with two stair approaches that works well as a Horde holdout. Stick a couple snipers up top, block the stairways with shields, and a good team should be able to hold its own for a quite a few waves.

And just to make things interesting, Epic has added in a periodic desert wind that whips up unexpectedly from time to time, causing nasty brownouts just when you need them least. It won't hurt you like the razor hail on the Hail map, it'll just obscure your vision for a bit, making it harder to hit your mark. 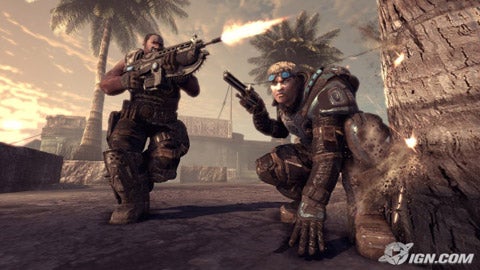 Cole and Baird's tropical vacation in the middle of Nowhere.
Gamers who just want to grab the 7 new maps will be able to download the Dark Corners pack for $19.99 (1,600 Microsoft Points). But for the same price, you can pick up the retail version of All Fronts, which contains all the downloadable Gears content released to date. Also included with All Fronts is a poster based on the art that appears on the steel case of the Gears of War 2 Collector's Edition and a booklet that contains game hints in addition to what Ortega calls some "new Gears of War lore." So if you're a truly hardcore fan, you'll probably want to opt for the retail box.

Gulp.
And while we're on the subject of Gears merchandise, get ready, because there's a lot more coming down the pipe. Ortega and Capps revealed that there are new collectible figures in the works, including Marcus and Dom in their Road to Ruin Theron Guard uniforms and a Lambent Locust that will only be available at Comic Con 2009. Need more? How about a new Gears of War t-shirt with "COG Life" written in gangster script along the bottom? Perhaps a new five-issue run of comics with covers by Jim Lee? All are in the works, along with the Gears of War film, coming in the near future from New Line Cinema and Legendary Pictures.

But perhaps the most significant milestone in the Gears franchising story was unveiled near the end of the event, when Capps, Ortega and Hyrb unveiled Imulsion, a new energy drink branded with the Gears of War logo. Although this correspondent did not partake of the ginger ale-colored beverage, it appeared harmless enough when imbibed by attendees. Imulsion, of course, is the mysterious energy source depicted in the Gears universe as having precipitated, via the Pendulum Wars, the downfall of human civilization.

Now in handy can form.

The new campaign chapter's titled Road to Ruin. In Road to Ruin, Marcus and Dom return to the Locust Hollow in a scene that can be played two ways, guns blazing or in all-new stealth mode.

Wow steath missions? awesome i love that you get to wear those cloths as for the energy drink.... wtf thats 2 far.

I went from script kiddie to network engineer

I shat brix when i saw Marcus and Dom in theron guard uniforms, I was so excited.

It got cut out of the original game,the extra campaign mission I mean.

Price added,and the name of the new chapter/a short description for you guys that don't read.