10 replies to this topic

You might be thinking ''wdf soccer in halo3?'' well yes butts not kicking its hammersing!

Bungie has annouced that they will add a soccer ball to halo 3 in the new maps ( Foundry) here is there topic and some pics.

Fooling Around with Foundry
Posted by SketchFactor at 12/7/2007 1:56 PM PST
By now you've no doubt heard about Foundry, one of three new battlegrounds that make up the Halo 3 Heroic Map Pack. This large voluminous warehouse is fashioned after the industrial spaces seen in the town of Voi during the Halo 3 campaign ("The Storm"). By default, Foundry is a great small to medium sized map that promotes some pretty frantic close quarters gameplay. But, beneath the surface, Foundry has much more to offer when combined with the power of Forge and a huge variety of brand new objects.

Last week we invited members of the media to come to Bungie and get some hands-on time with all three maps prior to their release. After methodically dissecting and playing through games on all three maps, the latter part of the day was more free flowing with an emphasis on Forge editing, particularly in Foundry. As friends from EGM, IGN, Gamespot, Team Xbox, Halo.Bungie.Org, Tied the Leader and others fiddled around with custom games, I took a seat at one empty station and began work on my own masterpiece.

As I mentioned above, Bungie has added a slew of new objects to the Forge palette for Foundry. You now have the ability to place and configure large objects like walls, stairs and ramps to literally craft your own unique multiplayer space. You can even place your own mancannons and shield doors. However, as cool as these items are, it's the wacky addition of a giant soccer ball that garnered the most attention from our visitors. And why not... after all, why on Earth would we include a gigantic ball in a sci-fi futurisitc shooter? Why not?

Of course a soccer ball is no good without a proper field to play on so that's what I set out to create on Foundry. I had heard of various people within the studio goofing around with soccer type games but prior to this press visit I had never experienced it myself nor had I gotten much hands-on time with Foundry and Forge. Much to my surprsie, my new map came together quick and turned out to be really fun. Here's what I did...

Step One - Cut a Hole in the Box

Ok, well it's not so much cutting a hole as clearing out every default object that appears in the map. I set out to remove every wall, weapon and spawn point until I was left with one big giant empty warehouse. We'll save you the trouble of having to do that when we add empty versions of all three maps to Bungie Favorites next week.

Once the level was clear I decided to wall off the back portion of the map, leaving one big square area for my 'field.' Initially I used fencing to create this barrier but once we started playing, it was only a matter of minutes before players were knocked over the wall into the out-of-play area. I solved this in real-time during the game by having my monitor drop a grav lift behind each wall so players could easily get back into the fray. In version 2, I simply made the walls a lot taller to avoid that problem all together.

Step Two - Put Your Junk in the Box

Once I had my general area setup it, it was time to add some objects back into the map and make it more functional. First up we needed some goals. One of the objects in the Forge palette is a "Fence Box" which, when turned on it's side, makes a perfect soccer goal. I placed once at each end of the map in the middle of the wall.

I wanted to visually designate which goal was used for which team so I dropped in another new Forge object, "Sign A" and "Sign B." I put on one top of each goal. The "Sign B" is colored red, so, that became the Red Team goal.

Next I had an idea to try and use Mancannons to faciliate corner kicks and as a means of speeding up the game and keeping the ball from getting jammed up in the corners. I dropped a Mancannon in each corner, all pointing outwards towards the center of the map (at a 45 degree angle).

For aesthetics I added some orange cones on the sideline and set up the spawn points along the perimeter of my "field."

Initially this was all I did to create my masterpiece but once the game started, I had another idea - how about dropping a Portable Cover equipment item for each team to use while playing goalie. It worked kind of well so I decided to make those a default part of my map - now one Portable Cover appears inside each goal.

Lastly, I dropped one gigantic soccer ball in the middle of the map. Now we're just about ready to play....

There are tons of ways you could elect to actually play Spartan Soccer but here's how I set it up. The game itself is actually taking place within Forge. From the lobby, I made some quick edits to the Player Traits for the game (press X in the Forge lobby to bring up these options).

The first change was to make players invulnerable to damage. We wanted to do this to allow the underlying Soccer game to be the focus and not have people dying and respawning all the time. However, this means that you can still assasinate players with strategically placed melee attacks (a strategy that would later prove quite useful).

Primary weapon was changed to the Gravity Hammer. Swinging your hammer is the primary means of moving the ball around the map. Secondary weapon was none and I also removed starting grenades.

Initially I didn't make this change but in retrospect, I think it may be more fun to also make some slight adjustments to the Player Speed as well. Fiddle with this to your own liking but a small speed boost will probably make the action on the field a bit more intense.

Finally I saved everything and we were ready to play. We played the game with two teams of three and then myself acting as the referee (as a Forge monitor). This worked out really well. As the monitor I would grab the ball and drop it down in the middle, sort of like a game of Foosball, and from there things got crazy.


The red and blue teams started wildly swinging their hammers, pushing the ball across the field. It was cool to see the "corner kick" Mancannons come into play almost immediately. In fact, it later became a big strategic objective as some players made end-to-end goals by carefully hitting the ball into the cannons or feeding it to the shooter who waited in front of the opponent's goal. At the very least, it provides a really fast way to get the ball up field to your teammates.

The Portable Cover equipment can be picked up by a member of each team and deployed as a last ditch effort to thwart a score. This actually worked quite well in our game.

When a team scored, the monitor flies over and picks up the ball to reset the play again. At one point there was some controversy on the field and we decided a penalty was in order. You know those signs I mentioned earlier? Well, they happen to be Yellow and Red so I dropped a big sign ontop of the offending player, the Halo 3 equivalent of issuing a Yellow Card in a game. Totally unnecessary but totally hilarious.

I also highly recommend that the referee/monitor also provides humorous play-by-play during the match along with yelling "GOOOOOAAAAALLLLLL!!!!!" when a score is finally made.

The great thing about Forge is that there are just so many possibilities to explore. As our game progressed, we experimented with some different concepts. What if we tried to play Polo instead of Soccer? I dropped a few Mongeese onto the map and the teams tried to drive around, pushing the ball and swinging a hammer from the Brokeback seat. I thought the concept was great but it didn't seem to work out quite as I had envisioned. We tried some Ghosts as well, which definitely spiced things up.

I also thought it may be fun to have a rocket launcher available to each team for a shooter to take a long distance shot from across the field. Nobody really managed to line up a good shot at the ball thoug so it didnt' really work out in our tests.

Other ideas that came up were experimenting with another Mancannon at each goal, the "Goal Kick" if you will. Maybe the defender could throw flare in the face of an attacker. Mabye a few precariously placed Fusion Coils could up the ante.

While we had a great time playing OUR verison of Spartan Soccer, the point is that you can create any similar or wildly different experience on your own. We tried a quick Basketball variation as well - turning the "Fence Box" on it's back so it made a big square bucket and then placing Mancannons on the perimeter to take shots. It has potential but finding the right distance and placement of the Mancannons will take some work.

In just a few days you can try all of this and more when Foundry and the Halo 3 Heroic Map Pack are released on Xbox LIVE Marketplace.

Now, if only real soccer involved armor clad players and giant hammers, I could finally get into the "world's most popular sport." Until then, you can find me online - I'll be the striker with the flaming head bending it like Beckham. 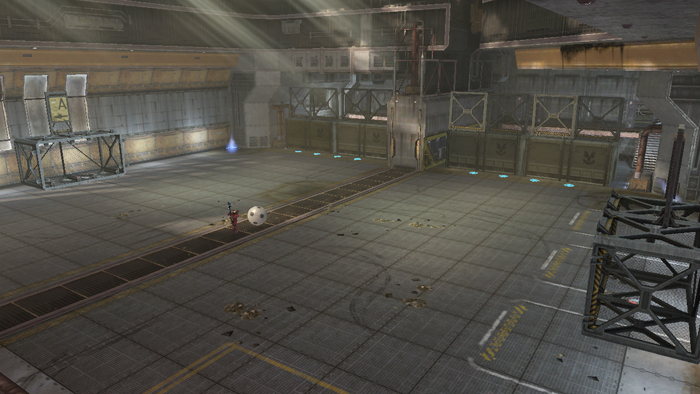 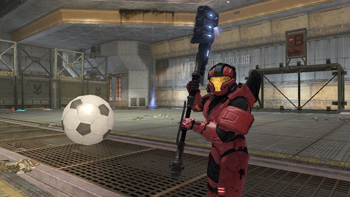 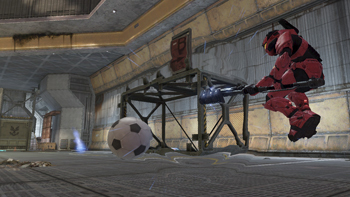 Eh, Everyone wil be entertained for like a week then bungie will be like ''OMG WHERE ARE OUR PLAYERZ'' and i'll laugh. But its deffinetly a good idea, even though i was hoping for the giant metropolis one.

A few good game types should come out with this.
I am personally looking forward to playing with this.

That would be a sweet a idea and if it don't work we'll just have to work faster and get modding more so we can do that. With the release of these maps modding should become easier to start because the maps should be easy to obtain. I can't wait!

That would be a sweet a idea and if it don't work we'll just have to work faster and get modding more so we can do that. With the release of these maps modding should become easier to start because the maps should be easy to obtain. I can't wait!

I not happy, I was just saying. Anyway looks awesome and is going to be fun for a while.

They many make it like the movies they may make it game data so we can't.

They many make it like the movies they may make it game data so we can't.

oooooooo when we get projectile swaps i cant wait to shoot automatic soccer balls?

Back to H3 Modding