Geohot VS Sony = OVER 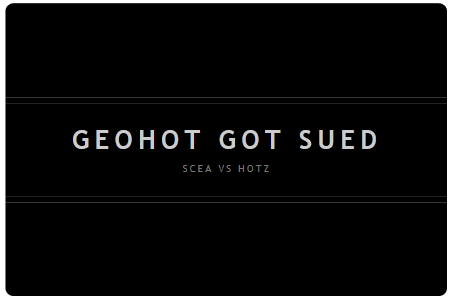 The legal action between Sony and George Hotz has come to a close, with both sides seemingly happy with the results. Sony has Hotz agreeing not to do bad things to its hardware, and Hotz gets to be left alone and continue with his life. Neither side has admitted any liability in the matter, and things seemed to have worked out... for the best?

As promised, all left over legal defense money, plus a little to bump it to a nice number, has been sent to the EFF. Thank you all so much for your support, without it, things could have been much worse.

This money goes to the EFF in hopes that America can one day again be a shining example of freedom, free of the DMCA and ACTA, and that private interest will never trump the ideas laid out in the constitution of privacy, ownership, and free speech.

At the end of the day, something I take comfort in. The PS3 got OWNED.
"Once the code works they'll never be able to take it away from us."

Will you be continuing your work on Sony products anonymously?
Nah. As much as I don't respect the goons at Sony, I do respect the court.

Will future research on Sony products be chilled?
Nah. If you piss them off enough for them to pull out the legal team and their million dollar checkbook, worst thing that happens is you have to super swear to never do it again.

Will Sony do a better job with security next time?
LOL, I think they'll do a lot worse. It wouldn't surprise me if the people who did PS3 security were fired. And I'm curious as to who Sony is hiring for NGP security. Lawyers? Get the code to sign a contract that it won't have exploits? You shouldn't piss off the community of people who are actually talented at this stuff. Hell, maybe you even pissed off your engineering employees enough to leave some nice backdoors?